Bagus BT Saragih, The Jakarta Post, Jakarta | Thu, 08/12/2010 9:26 AM
Police have retracted a previous claim to have wiretapped phone conversations between a KPK official and a case broker, after having promised to present the alleged recordings to the Corruption Court.
National Police chief detective Comr. Gen. Ito Sumardi said Wednesday the police did not have wiretapped conversations between Corruption Eradication Commission (KPK) deputy Ade Rahardja and suspected case broker Ary Muladi.
â€œWhat we have is not a tape. It is only the [call detail records],â€ Ito said.
The call detail records contain information on call traffic and the duration of calls made.
Previously National Police chief Gen. Bambang Hendarso Danuri had repeatedly claimed the police had wiretapped recordings, which would have formed strong evidence to back up police and Attoney Generalâ€™s Office (AGO) allegations that KPK leaders had attempted to extort money from businessman Anggodo Widjojo.
Activists had repeatedly voiced suspicions that the tapes did not exist after the police had three times disobeyed the courtâ€™s order to present them in the graft trial of Anggodo.
Two weeks ago, Anggodoâ€™s lawyers requested the judges order the police to present the recordings.
Anggodoâ€™s side believed the police had the tapes, which they thought could prove the KPK had attempted to extort money from him.
Itoâ€™s statement explains why police had failed to present the tapes. However, the CDR would be presented to the court, he said.
â€œWe will submit it [Wednesday],â€ he said.
The Attorney Generalâ€™s Office (AGO) denied any responsibility for the mistake.
â€œNeither the tape nor transcripts [of conversations] are with us,â€ AGO spokesman Babul Khoir Harahap said.
This statement, however, contradicted that of Attorney General Hendarman Supandji in November, before members of House of Representativesâ€™ Commission III overseeing law and human rights.
â€œWe have evidence that Ary Muladi visited the KPK office six times, and made 64 phone calls to Ade Rahardja,â€ Hendarman said.
Babul said Hendarmanâ€™s statement was based on the police case files in last yearâ€™s attempted prosecution of KPK deputies Bibit Samad Rianto and Chandra M. Hamzah.
The dossiers cite visits and phone calls among evidence.
Indonesia Corruption Watch (ICW) researcher Febri Diansyah said Itoâ€™s admission reinforced allegations that the police had fabricated the bribery accusations levelled against Bibit and Chandra.
â€œWe urge Attorney General Hendarman Supandji and National Police chief Gen. Bambang Hendarso Danuri to take responsibility for this mistake.
â€œThe two must resign from their posts because, as high-level state officials, itâ€™s very inappropriate to lie to the court,â€ Febri said.
At the beginning of the investigation into this case, Corruption Eradication Commission (KPK) spokesman Johan Budi said the KPKâ€™s internal supervision department had checked calls made by Ade already.
â€œWe did not find any call data records for conversations allegedly involving Ade Rahardja and Ary Muladi.
â€œBut, it is possible that our CDR is different to the policeâ€™s,â€ Johan said.
Both Ade and Ari had denied knowing each other.
â€œWhen the National Police said the recording of wiretapped conversations existed, we were also interested to hear them played back in court as demanded by judges, to reveal the truth,â€ Johan said. (gzl/lnd) 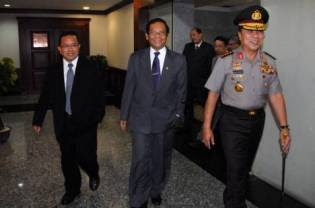 Police Chief is not sick: Spokesman

Where is National Police chief?