The President said, while officially opening the 23rd congress of the Indonesian Womenâ€™s Congress (Kowani), that at least three out of eight MDGs were related closely to women, namely those to pro-mote gender equality and empower women, to reduce infant mortality rates, and to improve maternal health.

Kowani claims connection with more than 80 womenâ€™s organizations, with a total of 30 million members nationwide. The congress, running from Dec. 2 to 4, is themed â€œKowani and womenâ€™s commitment to achieving the MDGsâ€.

â€œIâ€™m pleased [with the theme chosen] because it is what the government I lead has been occupied with days and nights â€” to achieve the MDGs,â€ Yudhoyono said Wednesday at the Presidential Palace, where he hosted congressâ€™ participants from across Indonesia.

â€œOver the next five years, I want Kowani, with its [upcoming] leadership and structure, to accompany the government and, along with other civil society groups, lead efforts to help the country meet the MDGs,â€ he said.

In relation to the gender-equality target, the President reiterated his call to all state officials not to discriminate against women in implementing their education and health policies.

As for reducing the child mortality rate and improving maternal health, he said that although Indonesia now enjoyed much better conditions compared to 50 years ago, the rates remained â€œunsatisfactoryâ€œ.

Yudhoyono said this was why he had appointed Endang Sedyaningsih â€” who earned her masterâ€™s and doctoral degrees in public healthcare at Harvard University â€” as the health minister in the new Cabinet.

â€œI appointed a health minister with a background in public health, because I wanted Indonesia to meet the MDGs, and see public health improved,â€ Yudhoyono said.

The President also called on Kowani members to support campaigns to protect the environment and fight global warming, with Indonesia among countries expected to be hardest hit by the greenhouse effect.

â€œIf the global temperatures continue to increase and the polar ice caps melt, the sea levels will riseâ€¦ We currently have more than 17,000 islands... would we want a few thousand of them inundated in several years from now?â€ he said.

â€œThis is not to mention the impacts from climate change which produces long draughts and floods. That is why I ask you, let us show more concern toward the environment.

Kowani was founded in 1928, and has often been dubbed a mere gathering place for wives of state officials.

However, its current chairwoman, Linda Amalia Sari, said the organization had been involved in the formation of new legislation affecting women and children, particularly over the past five years.

Linda, the wife of senior politician Agum Gumelar, was appointed as the state womenâ€™s empowerment and child protection minister because of her involvement in Kowani. 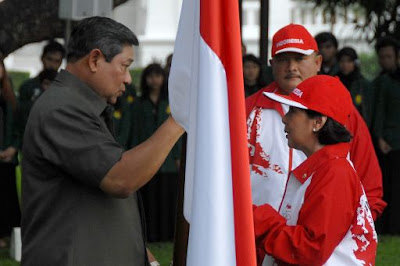 President Susilo Bambang Yudhoyono hands over the Indonesian flag to the Indonesian Sports Council and the Indonesian Olympic Council chairwoman Rita Subowo, during an official ceremony attended by the Indonesian contingent for the Southeast Asian Games in Laos at the State Palace on Friday. Indonesia is sending 515 athletes, 99 coaches, 28 managers and 43 officials to the games, targeting for third position at the biannual games. Antara/Widodo S. Jusuf