Lawmaker Trimedia Panjaitan said Wednesday the National Police should not only declare whistle-blower Comr. Gen. Susno Duadji a graft suspect, but also audit all regional police chiefs to uncover any embezzlement in the institution.

"There is a budget to do the audit," he said.

Susno has named several high-ranking cops in the National Police headquarters as case-brokers, for which they received millions of rupiah from suspects to help them win their legal battle.

The National Police fought back by detaining Susno, saying the former chief detective also committed corruption in, among others, the arowana fish farm case and a security fund in the West Java gubernatorial election.

Susno to be placed in a safe house 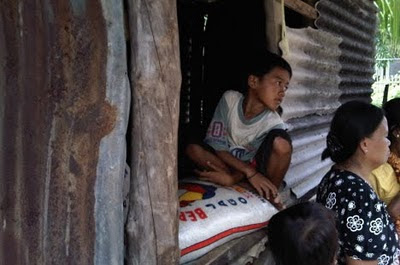 One of Darmi's six children sitting in the tiny goat shed the family calls home after selling their house, allegedly too pay bribes to a West Java police officer after her husband was arrested for murder. (JG Photo/Nivell Rayda)

Indramayu, West Java. Darmi is no Gayus Tambunan, whose case is gripping the nation and opens the door to bring corrupt officials to justice, but she is a living symbol of just how powerful and heartless the so-called judicial mafia can be.

For the past month Darmi, 35, and her six children â€” from 18 months to 13 years of age â€” have been living in a 1.5-by-2-meter goat shed and surviving on the generosity of their neighbors after a rogue police officer allegedly extorted money from her in exchange for dropping murder charges against her husband, Kadana, 40.

â€œMy husband was at the wrong place at the wrong time. He passed a rice field one afternoon and discovered that its owner had been brutally murdered,â€ Darmi told the Jakarta Globe. â€œThe victimâ€™s family saw my husband at the scene and reported him to the police.â€

She said the incident led to a series of shakedowns by Adj. Insp. Nana Sudana, a young police officer assigned to the Indramayu precinct.

â€œMy friend [at the police station] is ready to beat your husband up,â€ Darmi said Nana told her. The officer â€œpromised to keep my husband from being beaten up if I provided Rp 6 million.â€

But the officer did not stop there, she said.

â€œThe following week he contacted us again, this time asking for Rp 3 million more for the prosecutorsâ€™ office,â€ Darmi said, adding that eventually she paid more than Rp 14.3 million ($1,590) in bribes.

Kadanaâ€™s brother Chasnawi, 50, said that just to visit Kadana in the Indramayu penitentiary where he was detained, the family had to pay at least Rp 150,000 per visit. â€œIf I didnâ€™t do that, I could forget about seeing my brother,â€ he told the Globe.

For a farmerâ€™s wife like Darmi, the amount she had to pay in bribes was devastatingly high. She said she had to sell her house, a simple four-by-five-meter wooden structure on 50 square meters of land, for only Rp 10 million, along with every thing else she had, in a desperate effort to cope with the officerâ€™s demands.

The house, made from tree bark and used lumber, was covered in woven bamboo barely thick enough to protect the family from rain and the cold of the night. But it was a far cry from the goat shed she now occupies. Even for a goat, the condition of the shed is not ideal, she said.

During the day, Darmi and her family have to endure the scorching heat, while at night she struggles to keep them warm amid constant leaks. For several weeks they slept on a plastic mat, trying hard to ignore the smell of the goat that once occupied the shed, she said.

It was not until recently that her neighbors donated two mattresses for the family to sleep on.

All this they suffered in the belief that the murder case would go away. But on Tuesday, Kadana and his family were surprised when the Indramayu District Court found him guilty of murder and sentenced him to seven years in prison.

â€œKadana was outraged,â€ Chasnawi said, after which the family decided to report to the Judicial Mafia Eradication Task Force.

On Thursday, the team transferred Kadana and invited his family to Jakarta. Task force secretary Denny Indrayana, who visited Darmi on Friday along with several officials from the National Police, said the team promised Kadana and his family protection and contacted the Witness and Victim Protection Agency (LPSK).

â€œThe case serves as an example that poor people like Kadana are the true victims of the judicial mafia. Case brokers do not care if a person is rich or poor, they ruthlessly suck a person dry,â€ Denny said.

The head of the Indramayu precinct, Adj. Chief Comr. Nasri Wiharto, said the rogue officer had been arrested and was charged with violating Article 378 of the Criminal Code on extortion, which carries a maximum sentence of four years behind bars.

â€œWe will conduct both an internal investigation over allegations of misconduct and a separate criminal investigation. We will ensure that whoever is involved will be punished,â€ Nasri said.

â€œWe are still investigating all allegations against the suspect. Based on other reports, this is not the first time Nana has committed abuses of power and acts of extortion.â€

Man Claims He Sold Family Home to Pay off Police