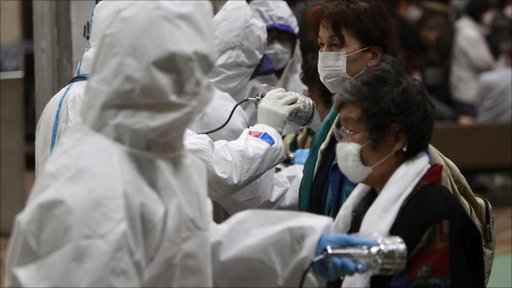 For Tokyo Electric Power Co.â€™s stricken nuclear reactors to release catastrophic amounts of radioactive material into the atmosphere, a rare chain of events needs to happen.
Averting a full-scale meltdown — which scientists say isnâ€™t likely — depends on cooling the uranium-containing rods at Fukushima Dai-Ichiâ€™s Reactor No. 2, said S.K. Malhotra, a scientist at Indiaâ€™s Department of Atomic Energy in Mumbai. A worst-case outcome may occur if overheating in the reactor culminates in the rupture of the steel lining protecting radioactive material.
â€œIn the worst scenario, an explosion could occur inside the steel pressure vessel, fuel bundles melt down and the radioactivity is exposed,â€ Malhotra said in a phone interview. â€œI would say there is a 10 percent probability still.â€
Read more here:
http://www.bloomberg.com/news/2011-03-15/-worst-case-nuclear-disaster-in-japan-hangs-on-string-of-unlikely-events.html
Dangers for Human Health From Radiation Poisoning: Questions and Answers
http://www.bloomberg.com/news/2011-03-14/understanding-risk-of-radiation-poisoning-in-japan-questions-and-answers.html
Health is Wealth
Bullbear Stock Investing Notes

Prime Minister Naoto Kan says he is confident Japan will overcome the earthquake-tsunami crisis.
Video will begin in 1 seconds.
THE biggest earthquake in Japan’s history left the global equities and insurance markets reeling as experts spent the weekend grappling with the financial impact on the world’s third-biggest economy and the knock-on effects to the global recovery.
Global markets wobbled, oil prices closed lower, the futures market for grain commodities dived and shares in global insurance and reinsurance stocks fell as analysts began to tally up the losses caused by the earthquake, the tsunami and the implications of a nuclear meltdown in the wake of cooling system damage.
Initial estimates of the damage to the Japanese economy are about $100 billion, with the global insurance industry believed to be exposed to less than $15 billion.
Advertisement: Story continues below
The Japanese government will bear most of the costs as it reinsures most homeowner earthquake insurance policies in a giant pool fund.
Share prices in Japan are expected to fall further when trading resumes today, while in Australia the futures market suggests a gain on opening. But given news over the weekend about the state of nuclear fallout, the loss of life and the disruption to economic activity, investors will be grappling with the impact for some time.
In the short term, economists believe the impact on the Japanese economy will be negative, in part due to physical damage to infrastructure and capital stock and because of the psychological trauma suffered by the Japanese, which is likely to trigger risk aversion, a drop in consumer confidence and an increased urge to save.
This could prove a negative for Australia as Japan is its second biggest export market, accounting for more than $37 billion of exports last year.
Investors expect Japan will be forced to increase its already bloated borrowing in a weak economic environment to finance the massive rebuilding project.
The damage has also triggered a debate about whether the earthquake will be a market-changing event for the insurance sector. Since the start of the year natural disasters, including floods and a cyclone in Australia and an earthquake in New Zealand, have wreaked havoc on the insurance and reinsurance industries, leaving the sector exposed to more than $50 billion in damages.
With so many catastrophes, the expectation is that prices will be pushed higher in the July 1 reinsurance renewals. If prices rise, general insurers will be forced to pass them on in higher premiums.
The insurance industry has been suffering from a so-called soft market. That happens when their prices come under pressure as insurers and reinsurers have lots of spare capital and compete more for business.
http://www.smh.com.au/business/japan-impact-rattles-investors-20110313-1bsx4.htm
l
Health is Wealth
Bullbear Stock Investing Notes

Jakarta Globe, Camelia Pasandaran | August 25, 2010
Jakarta. In a meeting with President Susilo Bambang Yudhoyono in Jakarta on Wednesday, the head of Japanese consumer electronics giant Panasonic confirmed that it planned to move its production base to Indonesia, senior Indonesian government officials said.
Gita Wirjawan, chairman of the Investment Coordinating Board (BKPM), said Panasonic president Fumio Ohtsubo told Yudhoyono and Vice President Boediono in separate meetings that the company would move its factories from China and Vietnam to Indonesia to take advantage of lower wages and the booming economy, which is driven by consumer spending.
Gita first revealed that Panasonic was considering such a move in March.
Industry Minister MS Hidayat, who was present at Ohtsuboâ€™s meeting with Boediono, said Panasonic was upbeat about the countryâ€™s economic prospects, and would close its factories in China and relocate them here. He did not offer a timeframe or investment value for the move.
â€œThey are committed to making Indonesia the production base for exports as well as for the domestic market,â€ Hidayat said.
This week, the Wall Street Journal reported that the average wage for factory workers in China is about three times more expensive than in Indonesia â€” $413 versus $129 a month â€” while wages in Vietnam were $136.
The report cited research by JP Morgan, CEIC and the International Labor Association.
Rachmat Gobel, the chairman of Panasonic Gobel, the electronics firmâ€™s local unit, also declined to cite an investment value for Panasonicâ€™s factory relocations, saying only that the parent company had been continuously investing in Indonesia, and had already brought the total to $400 million.
Panasonicâ€™s three factories in Indonesia â€” in Jakarta, Surabaya and Batam â€” make home appliances, personal electronics and batteries.
â€œIts current annual turnover [in Indonesia] is $850 million,â€ Gita said, adding that it is expected to surge to $3 billion by 2014, partly because of its recent acquisition of Sanyo.
Yopie Hidayat, a spokesman for Boediono, said Panasonic told the vice president the company may also develop solar panels domestically.
â€œIt plans to turn houses into self-sufficient energy houses with zero emissions,â€ Yopie said. â€œThey made the prototype in Japan but are considering whether to develop the industry there or in Indonesia considering the skilled-laborers here and the availability of abundant solar energy. The vice president supports the plan to make Indonesia as the production base, not only as the market.â€
â€œTheyâ€™re still considering the solar panel development here,â€ he added. â€œBut the LED factories have been here and thereâ€™s also plans to extend the battery production factory.â€
Boediono encouraged Panasonic to develop solar energy as it could supply remote regions of the country with electricity.
Gita and Hidayat both said Panasonicâ€™s decision was expected to convince other companies to make Indonesia their production base. Reuters, HONG KONG | Tue Jul 13, 2010 7:33am EDT
July 13 (Reuters) - Japan Credit Rating Agency (JCR) raised Indonesia's sovereign debt rating to investment grade in a move that could be followed by major rating agencies, reflecting growing confidence in the management of Southeast Asia's largest economy.
The agency raised Indonesia's foreign currency rating by a notch to BBB-minus and said the country could "sustain modest economic growth while maintaining macroeconomic stability and fiscal soundness in the years to come."
The move could be a boost to Indonesia's plan to issue samurai bonds toJapan's debt investors who, although yield-hungry, are cautious of junk-rated issuers.
In February, Philippines issued samurai bonds, or yen bonds issued in Japan by non-Japanese entities, to raise 100 billion yen, much below the initial target of $1 billion. Philippines is rated BBB-minus by JCR.
(Reporting by Umesh Desai; Editing by Hugh Lawson)

Japan’s factory output fell in February for the first time in a year, dragged by sluggish demand for transport and telecommunications equipment.