Jakarta (AFP) - Indonesia is considering a plan to move its capital away from sprawling megalopolis Jakarta, officials said Monday, but any jump to a new city could still be years away.
The idea of moving Indonesia's seat of government from an urban conglomeration of nearly 30 million people with some of the world's worst traffic jams has stretched on for decades.
Low-lying Jakarta is also prone to annual flooding and is one of the world's fastest sinking cities due to excessive groundwater extraction.
On Monday, urban planning minister Bambang Brodjonegoro said the long-stalled relocation plan won approval from President Joko Widodo who favoured moving the capital away from Indonesia's most populous Java island.
Jakarta, which suffers billions of dollars in annual congestion-and-flood linked economic losses, would remain the country's financial hub.
"(Widodo) decided on ... the option to relocate the capital," Brodjonegoro said after a cabinet meeting.
In a statement before the meeting, Widodo expressed support for the idea, but he did not give an alternate location or a timeline for any move.
"In the future, would Jakarta be able to carry the double burden of being both the centre of government and its business centre?" he asked in the statement.
"If we prepare well from the very beginning, this great (relocation) idea could be realised," he added.
During his re-election campaign, Widodo pledged to spread economic growth more evenly in the nation of 260 million.
He won a second term this month, according to unofficial poll results.
Local media have reported that a possible new capital would be Palangkaraya city on the island of Borneo.

President Susilo Bambang Yudhoyono has said the idea of relocating of the national administration center from Jakarta should be considered. 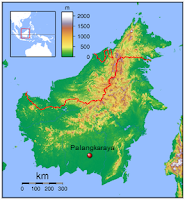 Speaking to governors from across the archipelago at a gathering in Palangkaraya, Central Kalimantan, on Wednesday evening, Yudhoyono said Jakarta was far too crowded to be the center of the national administration.

"Fifteen years ago there was a proposal to move the national administration center to Jonggol in West Java, but since the [1998] monetary crisis, ideas on relocating were no longer heard," he said as quoted by Antara state news agency.

Commenting on an idea to relocate the country’s capital to the Central Kalimantan city of Palangkaraya, Yudhoyono said it would not be practical because the city was too far from Jakarta.

But considering seeing the vast area of Palangkaraya, Yudhoyono said it was natural that its residents wanted to develop it into a better and bigger city.

He added it also made sense to develop Palangkaraya, because unlike other areas in the country, Kalimatan was relatively free of natural disasters such as earthquakes and tsunamis.

Yudhoyono and his entourage are in the city for a two-day visit to open the Indonesian Provincial Administrations Association (APPSI) national conference on Thursday.